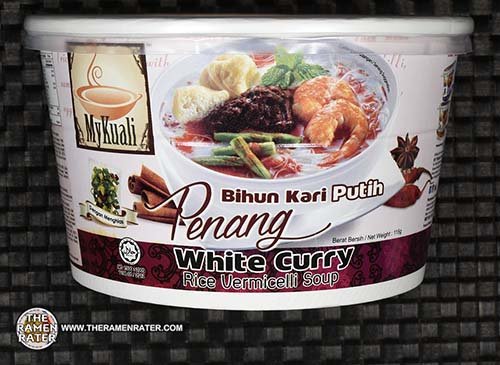 Ah, MyKuali white curry. You know, I think one of the biggest ‘aha’ moments was when I first tried MyKuali Penang White Curry Noodle back in 2013. They contacted me and asked if I’d like to try it. I’d only had a few scant Malaysian varieties and really didn’t know much about Malaysian foods or food culture at all. I think seeing that big sachet of paste made me do a double take, and the fact that the curry flavor was nothing like I’d tried before.

Indeed, a year after I had the opportunity to taste those noodles for the first time, my wife and I got an invite to visit Malaysia by MyKuali. It was a real eye-opener and my first visit to Asia. While there, our hosts Thomas and his family introduced us to the flavors of Penang. I really felt like I was on an Anthony Bourdain travel show; we’d wake up, and then be off to the hawkers courts, trying anything and everything for many days in a row.

A true education in the flavors of Asia. On my subsequent trips to Thailand and Taiwan, I have had similar experiences – trying local foods and learning about them. But the initial trip to Malaysia really taught me so much about the flavors over there.

Here’s some info about the Cuisine of Penang from Wikipedia –

Penang cuisine is the cuisine of the multicultural society of Penang, Malaysia. Most of these cuisine are sold at road-side stalls, known as “hawker food”. Local Penangites typically find these hawker fares cheaper and easier to eat out at due to the ubiquitousness of the hawker stalls and that they are open for much of the day and night. Penang island.[1] On February 22, 2013, Penang was ranked by CNN Travel as one of the top ten street food cities in Asia.[2] Penang has also been voted by Lonely Planet as the top culinary destination in 2014.[3]

Indian
Banana leaf rice(Tamil:வாழையிலைச் சோறு கறி)- White rice (or parboiled rice in authentic South Indian restaurants) is served on a banana leaf with an assortment of vegetables, curried meat or fish, pickles, and/or papadum. Is very much part of the few favourite local food in Penang particularly along Little India within the George Town Heritage zone.[7]
Biryani (Tamil:பிரியாணி)- Also known as nasi beriani and has many different variant.
Fish head curry (Tamil :மீன் தலை கறி) – Head of the red snapper stewed with vegetables such as okra, tomato and brinjals in a curry, usually served with rice. Passion of Kerala at New World Park, Burmah Road, is famous for this dish.[8]
Mee Goreng Mamak (Tamil:மாமா வறுத்த மி)- It is made with thin yellow noodles fried with garlic, onion or shallots, fried prawn, chicken, chili, tofu, vegetables, tomatoes, egg and spices, giving this fried noodle dish a distinctly unique Indian flavor.
Mee Rebus (Tamil:அவித்த மி) – a rich gravy made out of sweet potatoes, is ladled over fresh yellow egg noodles and bean sprouts. It is garnished with cooked squid, prawn fritters, boiled egg and fried shallots. A squeeze of a fresh local lime before serving.
Nasi Kandar (Tamil :நாசிக் கண்டார்) -a meal of steamed rice which can be plain or mildly flavoured, and served with a variety of curries and side dishes . Among the most well-known is a place called Line Clear, off Penang Road.
Pasembur(Tamil:பசெம்பூர்) – A spicy salad dish consists of fried titbits and shreded vegetable sold by Indian Muslims.
Penang Acar (Tamil:பினாங்கு ஊறுகாய்) – Indian pickles.Known as Urukai in Tamil language.achar are made from certain individual varieties of vegetables and fruits that are chopped into small pieces and cooked in edible oils like sesame oil or brine with many different spices[9]
Chinese
Bak kut teh (Chinese: 肉骨茶) – Literally translates as “meat bone tea”, the soup dish consists of meaty pork ribs and meatballs simmered in a complex broth of herbs and spices.
Bee Tai Bak or Mee Tai Mak (Chinese: 米台目) – Silver needle noodles served with clear soup and minced pork.
Char Koay Kak (Chinese: 炒粿角) – Stir-fried radish cake.
Char Koay Teow (Chinese: 炒粿条) – fried flat rice noodles with chilli spices with seafood typically prawns and cockles (and typically with fried eggs). (A stall at a corner along Chulia Street which uses distinctive narrower noodles than other vendors.)
Claypot chicken rice (Chinese: 砂煲饭) – Another popular hawker food in Penang comprises chicken cooked in a claypot over a fire, served with Chinese sausages, egg, salted fish and mushroom.
Fried Oyster Omelette or Oh Chien (Chinese: 蚵煎) – An oyster omelette dish available at many hawker stalls and coffee shops in Penang. Garnished with coriander or parsley, the omelette is served with a dip made of chilli sauce and garlic paste.[10]
Hainanese chicken rice (Chinese: 海南鸡饭) – A dish of Hainanese origin consists of rice cooked in chicken stock, and served with either roasted or steamed chicken, sometimes with sliced cucumber, bean sprout, spring onions and parsley.
Hokkien mee or Hae Mee (Chinese: 福建面 in Penang, 虾面 in Kuala Lumpur) – rice and egg noodles, served together with hard boiled eggs, small prawns, meat slices, bean sprouts and kangkung (water spinach) in a spicy prawn & pig bone (Chinese: 肉骨) stock.
Lor mee (Chinese: 卤面) – rice and egg noodles in broth thickened with corn starch and beaten eggs, served with eggs (some feature duck eggs), meat slices and bean sprouts. The noteworthy stall is located next to the Goddess of Mercy Temple, with branches in Jones Road and Pulau Tikus.
Wan Than Mee (Chinese: 云吞面) – also known as Tok-tok Mee from the sound of knocking bamboo sticks made by the vendors in former times to draw attention to their food, of a dish of egg noodles and wontons with sliced barbecued pork and vegetables.
Peranakan
Penang Laksa (Malay: Laksa Pulau Pinang), a dish of thick round rice noodles in a spicy and sour tamarind-based (or assam fruit-based) fish soup. The dish is garnished with mint, cucumber, onions, shreadded lettuce and pineapple. [11]
Malay
Ikan Bakar – is a general term meaning grilled or barbecued fish. A popular local fish for grilling is Ikan Kembong (Mackerel Fish). The fish is usually marinated in spices, coconut milk, sometimes stuffed with sambal,  wrapped in banana leaves and grilled over charcoals.

I always considered curry to be either sweet (Japanese curry) or savory (Indian curry). This was something altogether different; and I loved it from the first taste.

Today’s variety is with rice vermicelli. It took me a long time to warm up to rice vermicelli – but these days I welcome it and really enjoy it. Let’s have a look at this MyKuali white curry vermicelli by MyKuali.

Detail of the side panels (click to enlarge). Contains shrimp. To prepare, add contents of sachets to bowl and 400ml boiling water. Cover for 4 minutes. Finally, stir and enjoy! 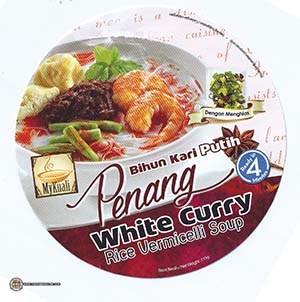 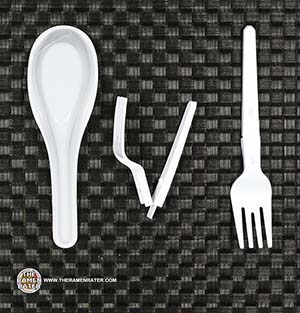 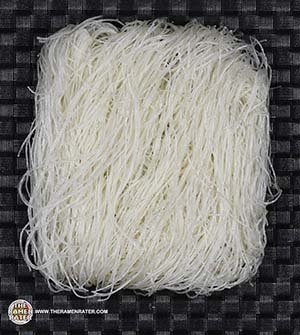 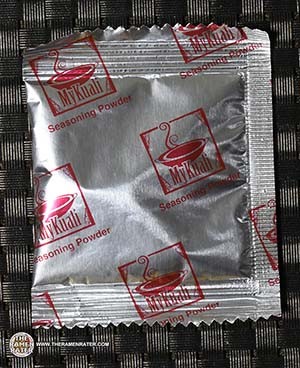 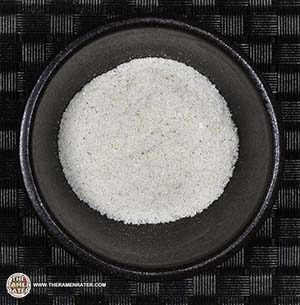 A light powder with speckles here and there. 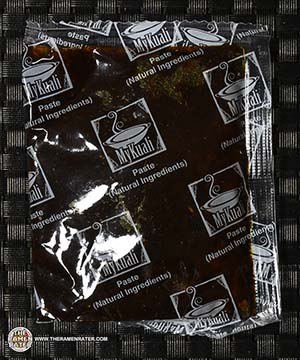 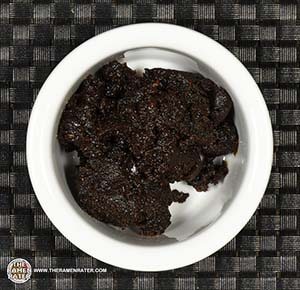 Thick paste with a strong aroma. 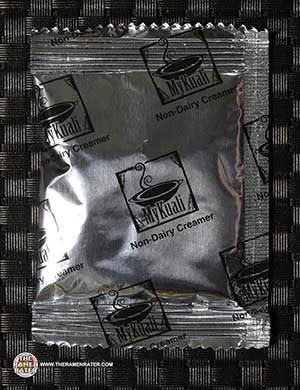 A sachet of non-dairy creamer. 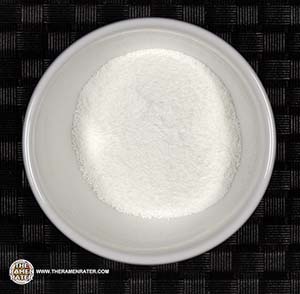 A fine and light powder. 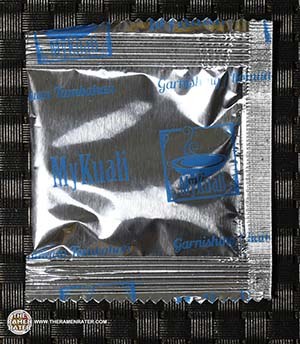 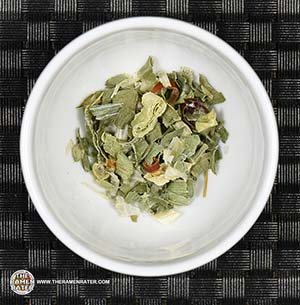 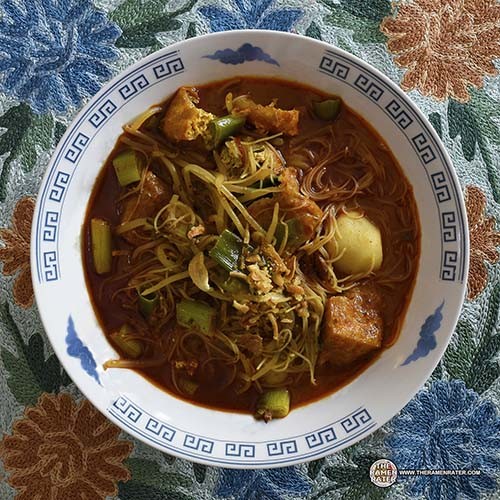 Finished (click to enlarge). Added Salad Cosmo mung bean sprouts, Dodo fishball, tau pok, spring onion, chilli oil and chilli powder. The vermicelli hydrates nicely in the four minutes. They go well with the broth which is thick. Thick and gloriously strong! A good smack of heat and lots of prawn and other flavors. The included vegetables hydrate great as well. Love this one! 5.0 out of 5.0 stars. EAN bar code 9555655005333.

Hunting for White Curry in Japan