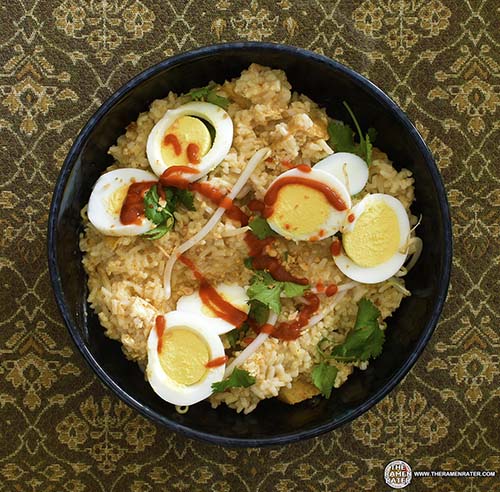 I usually wake up at 5 in the morning, take a ton of pictures, edit them, get a post ready and then around lunchtime do the actual pictures and cooking and review. I’ve done it this way for a while and it’s a pretty good schedule for me, especially with a one year old in the house with his own schedule. Today I thought I’d take a day off and maybe have something different for lunch.

I was planning on having some Prima Taste Laksa LaMian – the Wholegran version that’s #1 on this year’s The Ramen Rater’s Top Ten Instant Noodles Of All Time 2016 Edition. But then I thought maybe I’d mix it up a little. The recipe I used was an experiment, but here it is below.

1 pkg Prima Taste Laksa (actually, you could use any brand of noodles as long as it has seasoning sachets and isn’t a dry noodle)

Okay it’s really simple: everyone’s had fried rice, right? Well, you usually have to cook the rice. So instead of cooking the rice in water, why not use instant rice and let it cook in instant noodle broth? Most instant noodle recipes I see have this snarky ‘toss the seasonings – those are bad’ kind of attitude. This one actually is the opposite – toss the noodles and use the seasonings! You could have a ton of different varieties – I really liked the Prima Taste Laksa today, but think – beef, tom yum, seafood – it’s pretty much endless. The trick is guessing how much of the instant rice to add. This pack calls for 500ml boiling water, then to add the seasoning sachet contents and bring to a boil. I then added 1 1/2 cups of rice. and covered it. I looked at it a few times, giving it a stir here or there. It ended up being the right amount – but for a pack of noodles that calls for 400ml boiling water, that amount of rice could be too much. I also added in the chicken while the rice cooked in the broth. Afterwards when it was all done, I fluffed the rice and added in all the garnishes. It came out really good! something new to try!