‘Aren’t you worried about the amount of sodium you’re taking in?’ This question has been following me around for years now – from people commenting on a news article to a journalist interviewing me for a story. I’ve usually shrugged it off in some way as I’ve not had high blood pressure – ‘worst I’ve had has been borderline when visiting a doctor from time to time.’ These days however with my second son here and another child on the way, my thinking has shifted a little bit. I’m in my early forties (I mean twenties, cough cough) and thinking about how I definitely want to be there for my children and watch them grow into adults, live forever, and review instant noodles as long as they keep coming up with fascinating and tasty new takes of the local cuisine of the world. I’ve cut back on how much of the noodles I take in when I review in the last year or so – a slurp of broth, a mouthful of noodles and then the supplied garnishes to get the full feel for a product and review it. I then just try to eat the garnishes I might add in after that, and once that’s done, the rest goes down the garbage disposal. It’s hard though; there are varieties that I just have to eat the whole bowl after reviewing – the really tasty stuff, you know?

Most instant noodles on the market have a lot of sodium, and the main reason for that is that soup is mostly water. Water dilutes things, and noodles in bland water aren’t satisfying to anyone.

These were a few thoughts I had going through my head after being invited by James Wong, VP of sales for NuTek Food Science in Omaha, Nebraska to come and learn about their products. NuTek makes a salt – not sodium chloride salt like table salt, but one made out of potassium chloride; something that I’ve tried before but found to taste funky, bitter and all around nasty.

NuTek offered to fly myself as well as wife Christine and son Miles out to their headquarters and have me try their product and let them know what I think. I had turned down some free trips recently – one to Qinghai province in china to go on a special tour with other noodle bloggers, as well as a trip to South Korea to a big noodle expo – both of which sounded amazing but there was just no way that would work with our schedules. Omaha would be a quick trip and sounded neat – someplace new.

I met with James the day after we arrived in early June in the hotel lobby and we drove to NuTek’s headquarters. We chatted for a few minutes about instant noodles and then had a meeting with company’s President and COO Brian Boor, Dana Southard and Gary Uram from R&D.

They made a presentation about sodium and their product and it was very interesting. 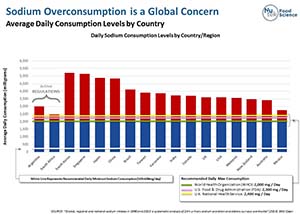 Click to enlarge As it turns out (and probably nobody is really surprised at this) that we take in way more sodium than we should. What we should be doing is taking in large amounts of potassium. It is recommended that people take in about a 2 to 1 ration of potassium to sodium. I noticed that Japan had a very high average sodium intake – so I asked how do you account for their longevity? Well, it turns out their diet is very high in potassium. Studies have shown that keeping a 2-to-1 potassium-to-sodium ratio is more important than the absolute amount of sodium consumed. (Journal of the American College of Cardiology) 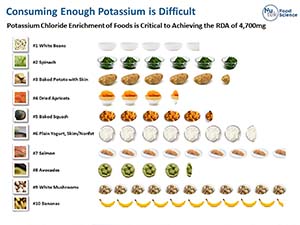 Click to enlarge The issue is that while it’s certainly easy to take in a lot of sodium, potassium isn’t as easy to get. As you can see, a lot of bananas and plain yogurt. 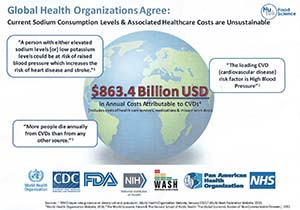 Click to enlarge The bottom line is that taking in so much sodium has increased the risk of cardiovascular disease quite a bit. The FDA has just come out with new industry guidelines on sodium in foods in over 150 categories in hopes of reducing sodium intake by a lot in the next few years. Many other countries have done this as well.

Next it was time to give this stuff a try. I was kind of nervous; what if it tastes horrible? Like I said, my only experience with a potassium chloride salt product was a few years back. I got one in a shaker at the store and tried it and it was bitter and nasty; to call it a salt substitute was a real stretch. I kept my mind open as we went to their research kitchen. 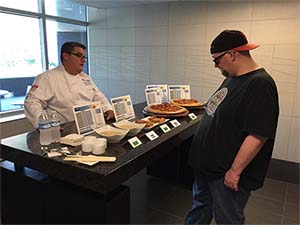 I was presented with three blind taste tests – one was an instant noodle whose broth was made with regular salt and the other broth made with 32% less sodium. Next were chicken strips, and then pizza. Time to turn off my brain and turn on my taste buds. I gave the first noodles and broth a try, then the second. I found the second to be more to my liking and have a nicer flavor. As it turned out, the second had the NuTek salt in it – at a 24% overall reduction in sodium (noodle plus broth).That immediately made me think – that’s 360mg potassium in there if the product had 1500mg sodium to start with. The second were the chicken strips. The first one tasted like a chicken strip – but the second tasted better; I could taste more of the chicken. Gary from R&D told me that potassium chloride hits the taste buds in a different way; sort of delayed. That being said, it gives the taste buds time to taste the food initially before the salty hit. Third was the pizza. They had used NuTek salt on one of the pizzas in the dough (37% sodium reduction), sauce (37% sodium reduction) and pepperoni (50% sodium reduction). It was at this point that I realized they had flown my family about 1700 miles to try some college dorm foods! All kidding aside, I couldn’t discern the difference between the pizzas. It was at that point that Chef Keys told me I should try the pepperoni from each pizza. What was funny is that one slice just seemed like normal pepperoni, while the other had a better flavor – and it was like my taste buds could appreciate it more. Sure enough, the latter was the NuTek salt pepperoni with 50% less sodium.

The proof definitely was in the eating for me. It’s almost insulting – why isn’t this stuff in every product, especially instant noodles? I mean with this stuff, you could now have an instant noodle cup for lunch and end up with much less sodium and the benefit of the amount of potassium you would get by having a banana! If it’s hard to get potassium in decent amounts here in the United States, what about other countries? Especially ones where instant noodles are more of a staple? Not only that, you can use this stuff in anything that you would use regular salt in.

After the tasting, I conducted this interview with Brian Boor about NuTek salt and posed some questions about it.

I brought home some of their Salt For Life consumer product (there’s one product for industry and one that replaces sodium chloride table salt in a shaker). Honestly, I don’t usually use a lot of salt on things, but I made some chicken I seasoned with their salt (which has 75% less sodium than table salt) and pepper and it came out really nice.

The bottom line is that I think this is really a miraculous invention. How many people do you know who have had heart attacks? Imagine if this was in a myriad of products everyone eats and could reduce the number of people with cardiovascular disease? I have no compunction in saying that I wholly endorse this product. I would say to the instant noodle industry as a whole, this is the future. I think that to not use this product would be ignorant – especially with such consumer outcry over sodium levels in processed foods. I’m no food scientist, but logic is logic, and my taste buds have given this 5.0 out of 5.0 stars. For more information, visit www.NuTekSalt.com.