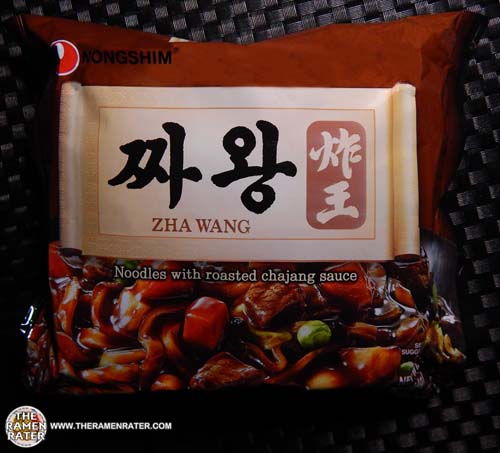 Being a superfan of all things instant noodle, I have newsfeeds I check daily on my phone pertaining to them. I saw an article about Nongshim’s Jjawang in the Korea Times New York edition. It mentioned with it’s release, jjajang variants are flying off the shelves in NY and NJ. I figured hey – I better find this stuff! 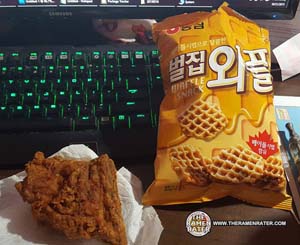 I had an idea where to look. In Lynnwood, WA, there’s a store called G Mart. They usually have a Nongshim promo at the front and sure enough, they did. We also had my friend Paul S. over last night and he brought some Heaven Sent fried chicken. I had bought some Nongshim Waffle snacks (they taste like maple syrup and crunchy waffle) and they went together well. Now, what’s jjajang? Here’s something from wikipedia:

Jajangmyeon (자장면; 짜장면; jjajangmyeon), a Korean Chinese cuisine, is a noodle dish topped with a thick sauce made of chunjang (a salty black soybean paste when unheated), diced pork and vegetables, and sometimes also seafood. Jajang (alternately spelled jjajang), the name of the sauce when heated, is the Korean pronunciation of the Chinese characters 炸醬, which literally means “fried sauce.” Myeon (also spelledmyun) means “noodle”, which is represented by the Chinese character 麵.

The dish originated from zhajiangmian (炸醬麵, literally “fried sauce noodles”) in China’s Shandong region. [1] Zhajiangmian was adapted in Korea to fit the Korean taste. The start of jajangmyeon can be traced back to theJoseon Dynasty. When the Joseon opened the Incheon port, many Chinese people from the Shandong region moved to a town in Incheon, which is now known as Incheon China Town.[2] These people created Chinese restaurants and adapted the traditional Shandong food zhajiangmian in a way that Korean people could enjoy. It is rumored that in 1905 a Chinese restaurant named Gonghwacheun (공화춘), created jajangmyeon. However, it turned out that Gonghwacheun was the first registered business.[3] At this time jajangmyeon was a cheap dish that the worker class enjoyed and was more similar to Shandong region’s zhajiangmian than the current day Korean jajamyeon. After the Korean War, Korean chunjang was invented. With Korean chunjang, caramel was added to give it a sweet taste. After this jajangmyeon became a completely different food from zhajiangmian.[4] The pronunciation of the dish’s name is nearly identical to that of its Korean counterpart. But Korean jajangmyeon differs from Chinese zhajiangmian, as Korean jjajangmyeon uses black Korean chunjangincluding caramel, and onions.[citation needed]

Alright – with your education complete, let’s check out this new Nongshim Zha Wang! 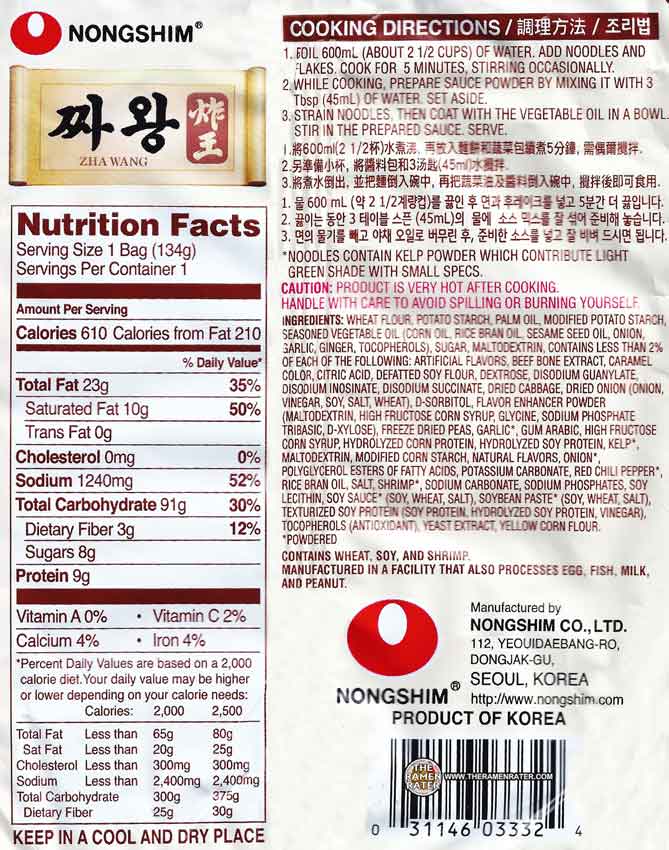 Here’s the back of the package (click image to enlarge). Contains shrimp. To prepare, add noodle and flake sachet to 600ml boiling water and cook 5 minutes, stirring occasionally, As it cooks, make the sauce by adding 3 tablespoons of water (45ml) and stirring. Drain noodles. Add in the contents of the oil sachet. Add prepared sauce and combine thoroughly. Enjoy! 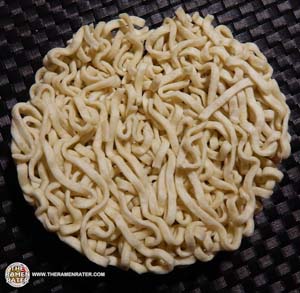 Broad, flat noodles. There are little specks of kelp powder in them. 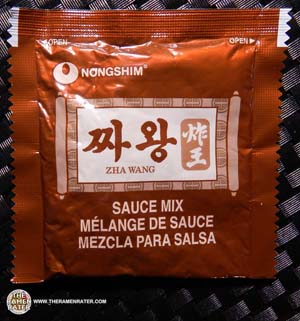 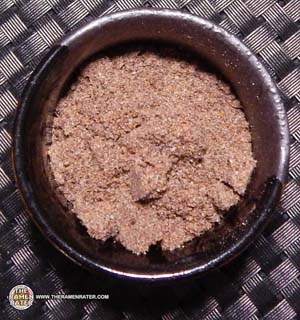 Has a nice black bean scent. 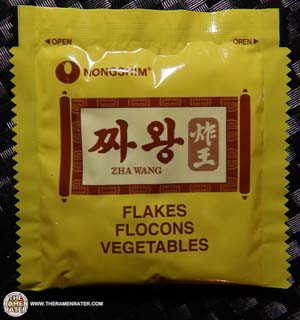 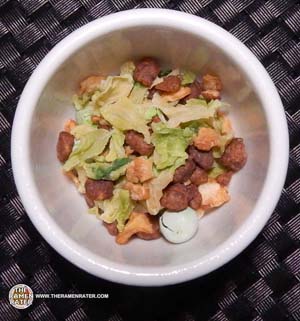 A nice mixture of vegetables. 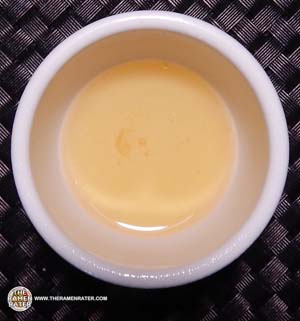 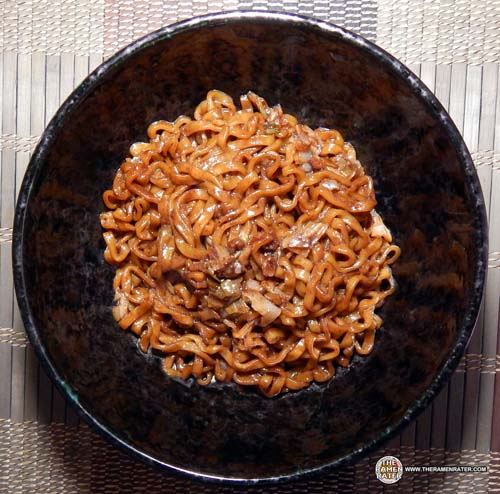 Finished. The noodles are out of this world – soft and chewy, with a nice width and thickness – very hearty. The sauce coats everything and there’s more than enough of it. It has a rich black bean flavor augmented with peas, cabbage and other veggies. This is the best jjajang I’ve ever tried. 5.0 out of 5.0 stars. UPC bar code 031146033324.

A TV spot from South Korea for Nongshim Zha Wang.