I’m very excited to bring you this Meet The Manufacturer – the first company from Thailand to participate! Thai President Foods has a multitude of lines, including the ever-present MAMA brand which has been on The Ramen Rater’s Top Ten Instant Noodles Of All Time lists more than once. Here is an interview I conducted with Ms. Pojjanee Paniangvait, Ph. D., VP of Thai President Foods:

THE RAMEN RATER> Thank you for agreeing to this interview! To start, can you tell my readers about the history of MAMA/Thai President?

The Company’s first Head Office was located on New Petchburi Road, while the first factory was inaugurated at Nong Khaem District, Bangkok. After the first year, all the shares then were transferred to Thai shareholder who remains as the major shareholder until now.

The company has been expanding with continuous growth and strong financial performance across all segments. Now there are 3 factories in Sriracha province, Lamphoon province and Rayong province which is “HALAL” certified factory.

The Company has also invested in many businesses supplying raw materials for the products which beneficial for the control of price and quality. The company has aimed toward joint venture investment with many foreign countries to combine knowledge, technologies for better products and production process and to increase marketing channels.

The Company has been listed in the Stock Exchange of Thailand and turned to Public Company with the present market value around 30,000 Million Baht (2014). 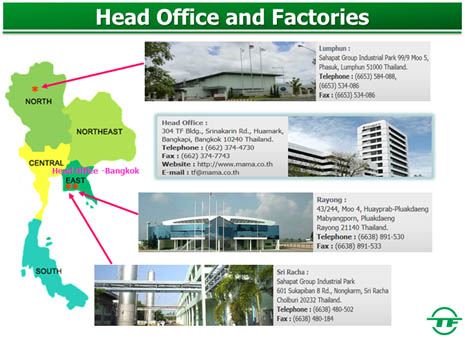 TRR> What was the first product you made?

TRR> Your company is located in Thailand. Can you tell us a little about your country?

TF> The Kingdom of Thailand is situated at the center of the Indochina peninsula and shares borders with Laos, Malaysia, Cambodia and Burma with a total area of approximately 513,000 km2 (198,000 sq mi) with around 65 million people. Thailand comprises 76 provinces and Bangkok is the capital city and center of political, commercial, industrial and cultural activities. Thailand climate is tropical which is divided into three seasons: cool in November to February, hot in March to May, and rainy in June to October.
Thailand has become a newly industrialized country and a major exporter, manufacturing, agriculture, and tourism are leading sectors of the economy. Thailand is southeast Asia’s premiere destination with over 14 million visitors per year.

TRR> Can you tell us about the varieties of instant noodles you make? 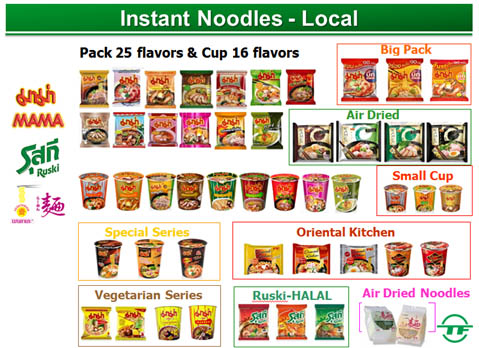 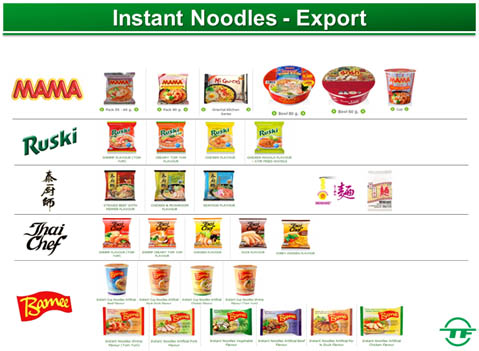 TRR> Do people eat your noodles dry as well as cooked?

TF> Yes, they do. (The dry noodles does not mean uncooked since the flour is fried in refined palm oil at 150-160 °C for 2 minutes.) Thai kids love to eat as snack which pork and shrimp tom yum flavors are popular. Just put condiment(provided in the pack) and mix with dry instant noodles(no need to put hot water)

TRR> Why the name MAMA?

TF> Its good meaning of “Mothers” who always do their best to take care of their children and how easy to pronounce with the fact that the first sound most of the little baby can make is Ma Ma Ma Ma .

TRR> How many instant noodle products do you produce every year? 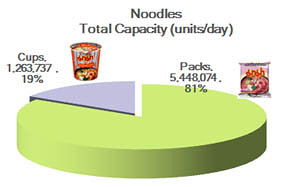 TRR> You make a wide range of products, including a lot of excellent Tom Yum flavor varieties. Have you thought of curry flavors?

TF> We have been developing the curry flavor which will be launched next year.

TRR> How does your noodle making process differ from other instant noodle manufacturers? 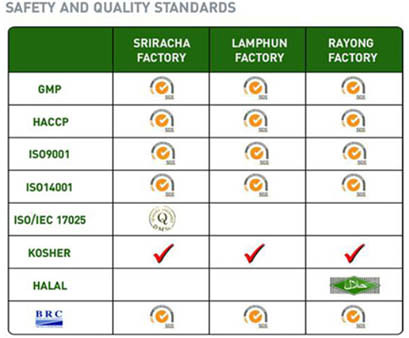 TRR> Are instant noodles the only products you make?

TF> The company also produces many varieties of products :
• Confectioneries such as biscuits, wafers and cookies
• Beverages in bottle and can
• Packaging 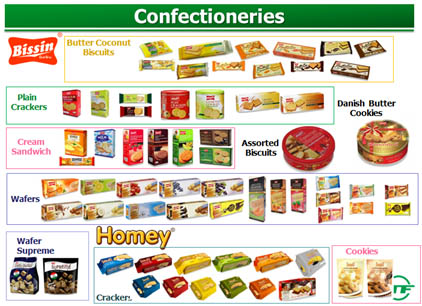 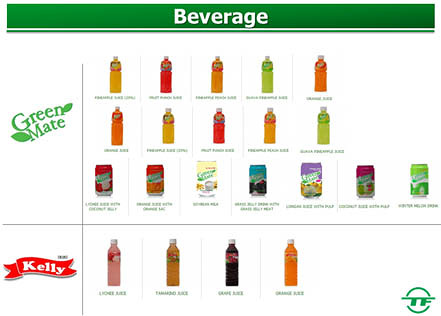 TRR> A lot of people are concerned with their sodium intake. How would you recommend people enjoy your product as part of a healthy meal?

TF> You can enjoy our product as part of healthy meal by adding other vegetables or meat as desired. To get more nutrition value. For sodium content, if you concern that you may be intake exceed the RDAs (Recommended daily allowances) you should intake 1 pack a day and combination with other food or you can reduce the amount of flavoring powder into half. But the concentration of flavor will be reduced appropriately.

TRR> Are you involved in in your local community or participate in charities?

TF> (Please visit more of our responsibility to our local community and charities at http://www.MAMA.co.th/en/csr.php)

High quality dried chilies Project
This pilot project was begun in 2010 at Huarua and Ponpang Sub-district in Ubonratchatanee Province to support local farmers to grow high quality chilies. The Company provided the knowledge of cultivation process, supported necessary equipment, and purchased the product at fair price. The Company hopes that local farmers who participated in this project could develop their product’s quality and raise their own living standard. This project has been carried on and received positive response from local farmers. The Company believes that the social activity in this principle will pave a good way for any other future community services.

Donation of Baht 40 million for SiamMintratiraj Medical Institution, Siriraj Hospital Foundation
SiamMintratiraj Medical Institution is founded with the purpose to develop Siriraj Hospital to be the leading medical institution in Southeast Asia. This foundation intends to promote Thai medical capability to be competitive with international institutions in area of research, service, and being medical center to exchange knowledge between domestic and international medical institutions.

Sponsoring 16th Tutorial Course for the University Examination Project
TF along with the Nation Group organize the Project “Tutorial Project for University Examination with MAMA no. 16” to prepare Thai student who is going to enter university examination. This project is intended to offer equitable educational opportunity for Thai student by transmitting the broadband signal to the participating school from 77 provinces of the whole country. The student had a chance to do the test in 9 subjects which were prepared by qualified instructors. In this event, the Company offered educational handout for all participants with no cost. Additionally,we provided financial assistance to needed students who joined this program.

Supporting the Project of “Mushroom House for Education at Chumchon Nong-Siew School”
TF Lamphun Factory supported the project to found mushroom house for Ban Nong Siew School in Lamphun Province. This project introduced the prototype of mushroom house to be used for education of local students and residents. Moreover, the Company held the common activity about mushroom growing between our staffs and local people every month, which received good response and participation
from surrounding community.

New Life Foundation, Chiang Rai Province
The Company donates books and educational materials to the library, and provides course to cook foods from instant noodles for the children who live with the foundation. Most of such children are from Aka, Mong, Lahu minority or from broken family, and some are deserted or have no nationality.

TRR> Are there any new products coming soon?

TF> Many country are, below is the region and proportion that we are exporting. Region base on our sale. 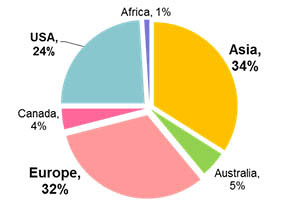 TRR> When you make noodles for yourself, what do you like to add to them to make them extra special?

TF> • Egg, meat balls and cabbages.
• Spaghetti can be replaced with our MAMA Oriental Kitchen noodles (pack type) + the addition of cabonara ingredients such as ham mushroom and cheese.
TRR> Thank you very much for this opportunity to learn about Thai President Foods and your products!

Wow – very thorough interview! Thanks again to everyone at Thai President Foods – let’s get started trying some of these exotic varieties!