I eat instant noodles. Every day. As of writing this list, I’ve reviewed 1,219 different varieties of instant noodles. Many people ask me if I get sick of instant noodles. Part of the reason I always say no is that I add things to my noodles to make them a more complete meal after I’ve reviewed them. I have seen quite a few lists online purporting to ‘hack’ or ‘pimp’ your ramen. Well, I’m not going to say that you will be able program it or hire it out, but it should be a bit more enjoyable and well-rounded. With that, here are my top ten favorite things to add to instant noodles for 2013. 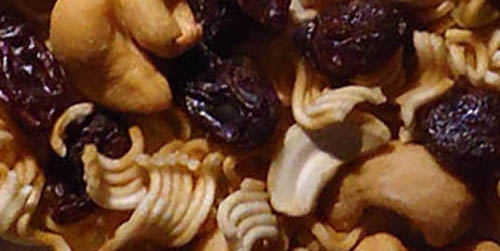 Recently, I reviewed a variety made in Nepal that mentioned eating it crushed and raw. This reminded me of snack mixes from India which contain a variety of nuts and seeds and gave it a try. It actually was quite good! What’s more, I’ve found that almonds go well in soupy noodles, and crushed peanuts atop varieties that don’t have any broth.

Have you ever gotten some noodles that are just too spicy? Want to add a little protein and heartiness to a thin broth? Peanut butter in small amounts can work really well for this. I’ve used it in South Korean ramyun to cool down the heat before and it works quite well. Just remember – start by stirring in a little at a time as it can overwhelm the other flavors if too much is used.

I found pickled ginger to be to my liking the first time I tried Japanese yakisoba at a restaurant, so I sought it out and found it at the store. It’s got a nice little added crunch to it and a sharp flavor that adds well to Indonesian mi goreng varieties, Thai varieties and of course Japanese yakisoba.

Whereas peanut butter calms down heat, chili peppers just ratchet it up higher. I usually like to get Fresno chili peppers (often referred to as ‘red jalapenos). They have a decent heat and the flesh is reminiscent of red bell pepper. Other pepper are great too of course – jalapenos either fresh or canned are good, Thai Sun peppers, etc. I usually will get a few of them and slice thin and toss in the freezer.

I started doing The Ramen Rater thing in 2002, but quit after 60 reviews. I embarked on a journey into the world of hot sauces which was quite enjoyable and started The Sauce Rater website, which alas is now no longer. I turned back to instant noodles in 2010 after over 250 sauce reviews and finding that most hot sauces were just vinegar, peppers and salt (basically it got boring). I decided to try making my own varieties and had some good luck. Some I found that were quite good you can find at the store or online would be Melinda’s Garlic Habanero Hot Sauce – has a heat from the two main ingredients that constantly goes back and forth between the two which is nice. One I use regularly is called Dua Belibis, a variety from Indonesia. It’s very hot but sweet as well. The one I use every day is called Ashanti Louisiana Hot Sauce – cheap and does the trick.

Shrimp and crab are great to use, but I want to focus on fish cake. Fish cake is fish that’s been ground up, some things added and then cooked, so all you need to do is heat it up. In the above picture, you can see narutomaki on the left. Used primarily in Japanese cuisine, it has a nice look, sweetness and slightly rubbery texture which is vaguely like calamari. In the center is kamaboko. Kamaboko is used in Japanese and South Korean dishes a lot and has the same kind of chewiness, but less of the sweetness. Finally, I would recommend seeking out Busan fish cake. It comes in many different shapes and is a great compliment to South Korean jjampong. As a side note, I tried Bai Top Shell (sea snails) earlier this year in a cold noodle recipe that was really quite good.

Vegetables are easy to source and easy to prep and toss in the freezer. Of all the veggies out there, I’m definitely partial to onions. Sweet onions can be prepped and frozen, then added to a bowl of noodles to add a little extra flavor. Green onions are a traditional addition to ramen and pair nicely. Herbs go well too – cilantro (coriander) and sweet basil can be a nice addition and provide authenticity.  You really can’t go wrong with vegetables, although potatoes rarely fit in.

One thing almost all instant varieties are lacking is meat. It gives a boost of protein and other nutrients. I have a really great piece of advice I recommend to anyone who is going to be enjoying a nightly bowl of instant noodles. I go to a supermarket that specializes in South Korean foods. You can buy meats that have been prepped for Korean BBQ; they’re generally sliced thin as bacon. What’s great about this is that it’s cheap and easy to bag up and freeze – a $10 package of beef or pork makes 12-17 bags of meat. All you do it take it out to thaw and saute it up with some veggies and put with your noodles. By the way bacon goes well also.

Cheese is commonly used in South Korean ramyun, but it works extremely well melted into many other varieties. A creamy chicken broth can be achieved with a simple slice of processed cheese. Not only is cheddar good – Swiss actually works well too as does mozzarella – they get stringy and chewy and taste great.

I’ve been putting eggs with instant noodles as far back as I can remember. It turns out that the original instant noodle invented in 1958 has a dimple in the middle of it. What for? So you can crack and egg on top as it cooks! There’s nothing like egg at add some heartiness and warmth to a bowl of noodles. Fried noodles with runny yolks are excellent on Indonesian mi goreng for breakfast. Drop an egg in a simmering pot of South Korean ramyun in the last 30-45 seconds of cooking. Hard boiled goes well with Japanese ramen. Definitely my favorite.

That’s it! Got any you like to add that weren’t mentioned? I’ll give ’em a try and I’ll mention you if they make next year’s list!