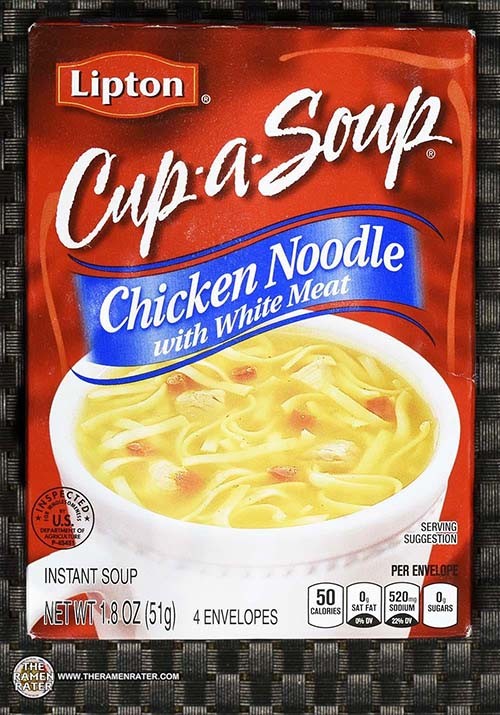 Okay so I’m guessing what you are thinking right now. He must be out of varieties to review. Nope. Actually, I saw this on the shelf and thought about the uncountable times that people have called domestic instant noodles Cup-a-Soup. This could be due to the fact that Nissin Cup Noodles here in the USA were called Cup ‘O Noodles up until 1993. Yep – sounds kind of alike, doesn’t it?

Here’s a little I found on Wikipedia about instant soups –

Freeze drying is a recent dehydration breakthrough-method that is restricted to high-value foods due to the high cost associated with the process. Despite its cost, freeze-drying is very effective in retaining the overall quality and nutritional value of the food through a process called sublimation, where water is removed (evaporated) from food in its frozen state without the transition through the liquid state.

Removing water from food prevents spoilage as it does not give an environment that favors the growth of spoilage-causing microorganisms such as bacteria, mould, and yeast. Freeze-drying also reduces the total weight of the food, especially fruit and vegetables that are mostly water, thus making the transportation of these products more efficient. Vegetables used in instant soup mixes often undergo freeze-drying that helps them retain their nutritional value, texture, and flavor. Furthermore, as the food remains rigid during dehydration, subliming water creates holes where the evaporated ice crystals used to be. This allows freeze-dried foods such as vegetables to retain their shape without shrinkage, and these foods rehydrate completely when water is added to the mix that fills the voids left by the subliming water. Due to the reduced water content of the freeze-dried foods that inhibit the growth of microorganisms and prevents enzymatic chemical reactions, these foods are considered shelf-stable and can be kept safe from spoilage for years by preventing the reabsorption of moisture. Freeze-dried foods can be stored in room temperature without the need for refrigeration.[9]

Although uncommon compared to most applications, sometimes a seasoning solution is sprayed directly onto ramen noodles to enhance their flavor, prior to being packaged.[4] Flavor ingredients used in instant ramen noodle soup include dried vegetables and meats, salt, MSG, onion, garlic, yeast extract, hydrolyzed vegetable protein, essential oil extracts and natural or synthetic flavor compounds.[4] Essential oils derived from onion, garlic and clove are sometimes used as flavorants for instant ramen soup, and may be manufactured using expeller pressing or solvent extraction and distillation.[4] Sophisticated methods exist that create flavor compounds, or complex flavors, for the flavoring of instant ramen noodle soups, in which volatile compounds from substances are isolated and reconstituted to create seasoning blends.[4] Techniques to create flavor compounds for instant ramen soups include gas chromatography utilized with mass spectrometry and olfactometry.[4] Ramen noodle soup seasoning packets may also contain anticaking agents and flow agents to prevent the product from clumping into a solid mass.[4]

I dunno… This definitely isn’t the same as instant noodles, however it is instant and has noodles. This is a pretty iconic brand here in the United States – what’s more is that I’m now curious if there are other varieties. Would be interesting to do a Meet The Manufacturer on these perhaps. Anyways, on with the Cup-a-Soup show! 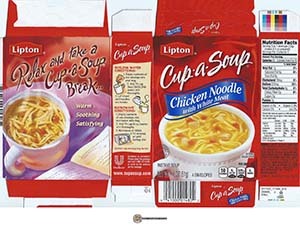 Detail of the outside of the box (click to enlarge). Contains chicken. To prepare, add a sachet (the box contains 4) into a mug or large cup. Add 3/4 cup boiling water. Stir and enjoy! 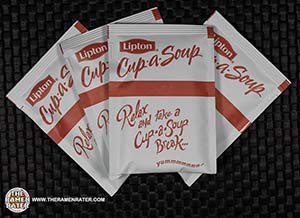 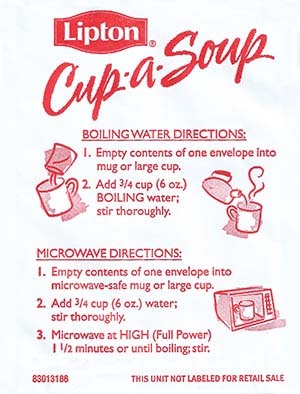 The back of a single sachet (click to enlarge). 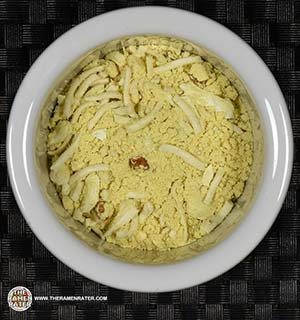 Contents of one of the sachets. 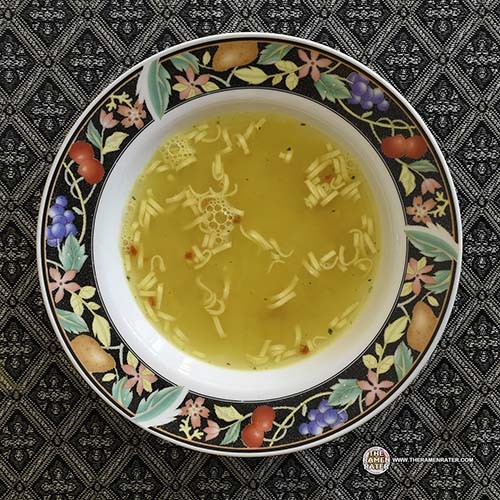 Finished (click to enlarge). The first thing I noticed was that in the steeping method, it says ‘wait until noodles are tender.’ What’s a little troublesome about this is that you have to keep trying non-tender noodles until they’re the desired consistency. I’d say about 3~4 minutes was about right for me.  I would have liked to see more noodles, although many were eaten while I was figuring out how long they should sit in the mug for. The broth has a salty chicken taste which is very good – I definitely think sipping it out of a mug would be preferable than as displayed here. As far as the chicken, there are bits of chicken here and there and they ended up hydrating well. 1.75 out of 5.0 stars.UPC bar code 041000014802.

A TV commercial from 1972 proclaiming this is a new product.