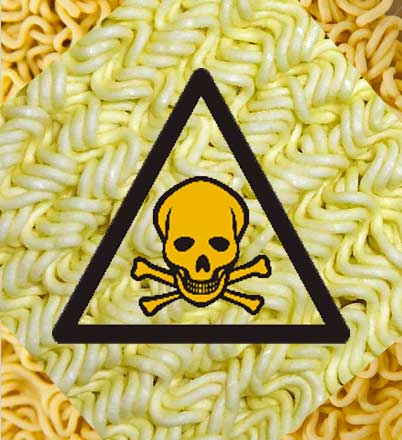 7/31/2013 – UPDATE – I’ve been getting quite a few comments about wax in noodles again, so I thought it would be a good idea to repost this. Recently, an article outlining reasons not to eat instant noodles came out which perpetuates these rumors and false claims.

8/31/2012 – UPDATE – Thanks to everyone checking out this article and for the nice words! Thought I’d also mention I have an article about cup noodle rumors you might like – check it out HERE.

At first, I found it laughable, but now it’s gotten to the point where I feel something should be said. I’ve been seeing more and more posts going up on blogs from around the world about the dangers of instant noodles. They claim some ridiculous things that are just plain untrue. I think the people who might really bear the brunt of this are those among us who eat instant noodles because they can’t afford more expensive foods. Here are some of the issues I’ve seen mentioned and some facts and supporting info. 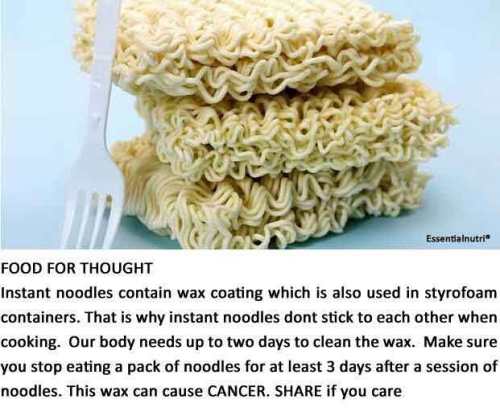 UPDATE Sept 5, 2012: Saw this picture as I was looking for articles to put on the Noodle News and

figure it’s got to be the culprit for a lot of the worries people have had.

Heating MSG (Found In Instant Noodles) Changes It Into A Toxic, Deadly Form

This one is kind of obvious. If heating MSG made it deadly toxic, wouldn’t everyone be dead by now? Here’s a great post about this and other things from a blog called The Butcher Of Kuala Lumpur:

Here’s Snopes.com’s article about it:

Instant Noodles Are Coated With Wax

You’re kidding, right? One of the reasons they’re saying is that the wax ‘keeps the noodles separated.’ Anyone with an ounce of reason will know that instant noodles that are coated in wax aren’t going to stay separated from the wax. Wax melts and relatively moderate temperatures. They mention boiling the noodles, draining them and putting them in fresh water. The only thing you’ll get by doing this is would be that you’d get rid of some of the gluten.
Here’s what I found on a page by Monde Nissin:

Instant noodles do not contain any wax. Noodle strands do not stick together as a natural consequence of the process of slitting or cutting the noodle dough into strands, steaming, and then frying in normal cooking oil.

You can see the page at http://www.mondenissin.com/main.php/products/lucky_me/truth_myth

Here is a video I made at the Wheat Marketing Center in Portland, Oregon. This is called a ‘pilot line’ – they test recipes and fine-tune them for mass production on larger equipment. You can see here there is no phase of creating instant noodles that involves wax.

Another strange one that’s circulated quite a bit lately. Supposedly, this would be so the cup wouldn’t leak. I dunno – weird reasoning there. I found two things that logically supported that this is a false claim.

First, there’s a page on Snopes.com. Snopes is renowned for shedding the light of reason on rumors that go from implausable to fact in minutes in our information based world.

Second, again you can hit up the Monde Nissin page – they have a really great list of Facts vs Myths that should answer most questions asbout the safety of instant noodles.

What got me really amped up to write this article was this article that I just found recently – http://thinkbet.com/2012/04/25/disease-caused-by-excessive-instant-noodles-consumption/

I was very interested in finding out what this ‘Chinese Restaurant Syndrome’ was  that’s mentioned at the end. Well, This article about it mentions how MSG has never been directly proven to correlate with it.

Here’s another article – this one is about preservatives – http://health-food-nutrition.blogspot.com/2010/10/right-dose-preservative-noodles-safe.html

So much hype and so much fear don’t seem very healthy – I’m pretty sure hypertension has been proven to be unhealthy. Anyways, take everything you read with a grain of salt (I’m even groaning at that one – sorry) and use common sense when you read scary food articles online. Do your research – don’t let someone with an agenda decide what’s good for you.